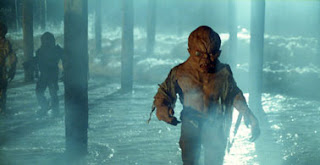 Well, It's Alive III: Island of the Alive isn't necessarily 'alive' and if by alive, I mean, interesting enough to capture my attention while I watched it without reverting to the internet or idle gossip on the phone while it played out. I mean, it's not without its merits. I actually quite love love love the first installment. It solidified Larry Cohen as one of my all time favorite directors, at least until I learned he was responsible for Captivity. He had actually fallen off my radar long before Captivity, but still. I like his early crap, especially It's Alive and The Stuff, and to a lesser extent, Q, the Winged Serpent. And God Told Me To is also decent. But the only thing you need to know about It's Alive III is the above still. Mutant babies all grown up. And breeding! And in love! Enough said!
Posted by Jenn at 8:28 PM