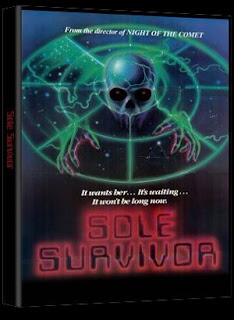 I wanted to see Sole Survivor for a really really really really long time. I can't even remember why I wanted to see it in the first place - the cover ain't even all that cool, and kinda gives me a science fiction vibe, which isn't really my normal fare, but I'm not opposed to a decent sci-fi flick, especially it it borders on horror. I think I wanted to see it because a.) Thom Eberhardt directed it and he directed the superb Night of the Comet and b.) Chris Alexander gave it a good write up when he still had his column in Rue Morgue, which btw, turned me on to The Brain, a wonderful Canadian flick from the 80's (Boglin Marsh, I'm looking at you). However, Sole Survivor is long out of print and hasn't been given a DVD release and I've had no luck locating a copy on ebay or Amazon, not that every moment of my life has been consumed by tracking down a copy of this movie for the last five years or anything, but still. I was pleasantly surprised when I happened upon a copy at the video store I blogged earlier about here. The guy wouldn't sell me his copy but he consented to renting it to me for a buck fifty and I agreed. It was also wholly satisfying to go to a video store straight out of the eighties and rent a VHS tape. How long has it been since I went to a video store and rented a tape and driven the tape back up to the store after I watched it, and deposited the tape in the drop box? Man, it took me back.

So, um, yeah, Sole Survivor. If you ever wondered where the guys that made Final Destination got their idea for Final Destination*, look no further than Sole Survivor. If you weren't wondering that, that's okay too, read on anyway. Karla Davis, an actress who has prophetic nightmares and hits the booze pretty heavily, has one of her prophetic nightmares about coffee commercial producer DeeDee surviving a plane crash. Seems DeeDee is the only one who survives the violent crash for whatever reason. Well, this scenario plays out in real life when DeeDee actually survives the crash much in the same way Karla dreamt it.

Needless to say, DeeDee winds up in the hospital, even though she's seemingly fine and is unaffected about what happened to the rest of the passengers on the plane. She even finds it appropriate to flirt with her doctor, who she later starts a sexy times relationship with, even though it's probably not in the Hippocratic oath or anything to get involved with patients. Doc warns her about Survivor Syndrome, where survivors of bad accidents often feel guilty about surviving or unworthy that they are still alive. Often this results in the patient's subconscious suicide - they drive too fast or put themselves in other dangerous situations to inadvertently kill themselves. You know, to deal with the guilt of being alive. All of this is part of a very slow build up that leads to more slow build up.

DeeDee leaves the hospital via the back entrance to avoid news reporters and sees a small child dripping wet and silent standing on a loading dock. (I got a real J-horror vibe here. Little creepy kid, water, maybe a curse or something going on.) DeeDee asks the kid if she needs help or wants her to take her back inside, but the kid just stares menacingly and causes a truck with no driver to almost crush DeeDee. Then Kristy, DeeDee's friend and neighbor, pops up to get DeeDee out of there in her bitchin' Camero. There's some more slow build up and the dorkiest coffee commercial ever, as well as a shot of a fabulous 80's answering machine.

We get the (obvious) sense that something is after DeeDee at the hospital but later again when she's driving and a dude just steps in the middle of the road, causing her to almost wreck. Later again, she's in a parking deck and hears some weird noises. Another scene pits her against an elevator that's acting mysteriously. Whereas FD had some pretty inventive kills from what I can remember, as well as some fabulous attention to detail (the first one), DeeDee thwarts death in some really unscary and stupid ways. Refusing to believe that she is suffering from Survivor Syndrome, DeeDee takes some anti-depressants and goes over to Kristy's for cocktails. Kristy manages to get herself killed in the pool (in a scene that is a little bit giallo-esque, at least in its POV shots), and returns as a corpse intent on killing DeeDee. So it seems the recently deceased, as well as mechanical equipment, can come back and kill DeeDee?

So, did DeeDee imagine all this? Is is just part of her suffering from Survivor Syndrome? Are the dead really returning to life and trying to kill her? Are elevators working for Death? Wait, why did DeeDee survive in the first place again? Do I care? I'm not saying that I regret having watched Sole Survivor, but I had this whole mythology built up in my mind about it, that it was going to be greater than the sum of its parts, especially since it seems to have had so much influence on future films, and culled from other genres as well. Sigh.

*FD is one of those movies that you talk about with people at work if you feel like talking about horror movies but you know everyone at work isn't really into horror movies like you are. Everyone's seen at least one FD movie and has some sort of opinion about it.