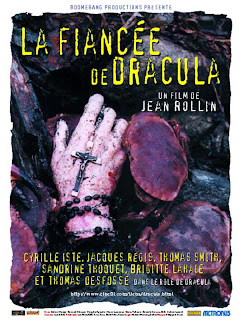 In case you were wondering what Jean Rollin's been up to the last five or seven years or so, you can stop wondering because he was obviously hard at work toiling away at making the masterpiece that is Fiancee of Dracula (2002). (I'm always wondering what people are doing right at the moment I think about them. Like I wonder what Michael Jackson or David Lee Roth are doing right now. I wonder the same about Jean Rollin, like what is he doing right this very moment? I don't really have a lot going on.)

Fiancee of Dracula is like most of Rollin's oeuvre - it's disjointed and surreal and features some lesbian vampirism, as well as some over-the-top situations involving nuns (not that a lot of the other work I've seen by Rollin has to do with over-the-top situations involving nuns, but that's what sets this one sort of apart, amongst other things, I suppose.) The film starts suddenly when we see two men, an old professor type and a younger curly-haired leather-jacket wearing gent, peering into a cemetery. We'll find out later that the professor is a professor who really wants to meet Dracula and the young man is Eric, his assistant. As they look into the cemetery, they see a dwarf in a jester outfit and his vampire lady friend traipsing about. The vamp gets nakey and drinks the dwarf's blood and as they are about to do sex to each other on top of a crypt, the Professor grabs the dwarf and demands to be taken to his leader, Dracula. He's pretty fearless in the presence of the vampire, perhaps he's done this sort of work before? He is a professor, I guess. The dwarf says he doesn't know where Drac is but if they go talk to this insane woman in the nearby village, she can tell them where to go.

Satisfied with this, Prof and Eric go off to find the village idiot. They meet her by a silo or a tower or something, and she rambles on about sharks, opium dens, and the Queen of Shadows, who is really the HBIC if you want to talk to Dracula. She also tells them that the Queen of Shadows is kept by the Sisters of the Order of the White Virgin and they should go to their convent if they want to talk to the Queen. She tells them all this while humming and dancing around foolishly, and none of it makes much sense, but the Prof trusts her, I mean, why not?, and they head off to wherever the hell the convent is.

Upon arriving at the convent, they meet Sister Pipe and Sister Cigar (an attempt at some kind of Freudian allusion?), who welcome the men into the convent because it's been awhile since they've seen mens. These are not your ordinary nuns - they make out with each other, lift up their habits to show the Prof and Eric their underwear, perform ritualistic gypsy pagan exorcism dances, and have oil paintings of naked ladies all over their ornately decorated convent. Oh yeah, and they also take care of Isabelle, the aforementioned Queen of Shadows, who we are told later is going to become Dracula's bride. When we meet Isabelle for the first time, she's wearing a sequin and tassel number and spouts all manner of nonsense about Jesus filling our hearts with whatever and then she retires to her jungle themed room for the Prof and Eric to come interview her. She's as crazy, if not crazier than the village idiot, and tells them all manner of things about how Dracula lives inside a clock and how he speaks to her telepathically and fills her with darkness.

The Prof tells her to get the eff outta dodge, but don't let anyone stop her so Eric and him can follow her to this clock where Dracula lives so they can talk to him about important Dracula stuff, I guess. He then casts a spell on her so she'll sleep until midnight, the appropriate hour to go see Dracula. Then two weirdos stop by the convent to talk to Mother Superior about claiming Isabelle as their daughter or relation or cousin, who knows. After Mother Superior lights a cig on an ornate light-up singing Crucifixion lighter, she tells them hell to the no, they ain't getting Isabelle. The weirdos vow revenge and take their leave. It's all very theatrical.

Meanwhile, the dwarf takes Isabelle to some castle ruins in the sidecar of his motorcycle with a white lacey bassinet on the back. They meet up with an Ogress (the same actress that played the village idiot - only now she's an Ogress, which there is no real indication of her Ogress-ness, except the fact that she tells us "I am an Ogress." She's got on a lot of eye liner and a sexy dress and she eats the baby in the bassinet. So we're, of course, supposed to believe she's an Ogress, then.) She tells the dwarf and Isabelle she'll eat up their bones but then Eric shows up and shoots her, which is awesome, because she talks waaaaay too much. They navigate through the castle to a courtyard and the dwarf and that weird revenge swearing couple bring out a coffin. A woman in a blue dress shows up and plays a violin. The the beautiful (subject to opinion) She-Wolf shows up, and much like the Ogress, we're merely told she's a She-Wolf, although she does have long fingernails and wears a red dress, two She-Wolf qualities if there ever were two. She's the MC for this unholy night and tells everyone that the nuns gotta be killed as the sacrifice to bring Drac back to life. She, like the Ogress and the vamp, aren't particularly frightening. At one point, the She-Wolf and the vamp make out, but in about the least erotic way possible. Some other stuff happens like a nun gets her heart ripped out and the vamp gets thrown off a stone wall by the dwarf, but none of that really advances what attempt, if any, at a plot.

We finally get to meet Drac at about an hour in, and he does indeed rest inside a clock, like one of those big grandfather clocks that could actually fit a human inside. I know this because when I was a kid my mom inherited a clock like that from her grandmother and I loved that clock because it was really ornate and had all these animals intricately carved into the wood. I was like seven then and I could fit inside the clock if I really smooshed myself in there. My mom caught me doing it and yelled at me because the clock was an antique. I wonder if she still has that clock, I haven't thought about it in years, but I would love to have it in my own house. Anyway...Drac presents himself, and checks out Isabelle in her wedding attire, which consists of some white netting and red flowers placed over her boobies and crotch. The Professor and Eric are still hanging around, as are the nuns who are carrying human skulls and wearing funnels on their heads (seriously), and now the Prof can apparently communicate telepathically with both Eric and Isabelle. The dwarf is still running around somewhere too, but now instead of being dressed like a jester, he's dress like a skin, with combat boots and a bomber jacket and braces.

Eric decides somewhere along the line that he's got to save Isabelle from Drac's clutches, because all this is a bunch of mumbo jumbo anyway, and he doesn't believe in it. Then why is he the Prof's assistant in the first place? The Prof looks into Isabelle's mind and sees terrible darkness and evil and the whole thing dissolves into a cacophonous craziness that I'm not really entirely sure I understood.

Christian said Fiancee of Dracula was as bad as Alien Blood, which also featured some non-threatening, non-vampire-acting vamps, but I'm not convinced. Yeah, it was bad, but in a pretty okay, kinda alright way, because it's just so damn surreal. It's like what were you thinking, Jean Rollin or guy that wrote this, did you really think this made sense? And then we're watching the credits role and I said something like, do you think that out of the hundreds of people that worked on this movie, not one person was like, hey, this doesn't make any sense? It's not nearly as erotic as Rollin's stuff from the seventies and it has a lot more dialogue, which isn't necessarily a good thing. But seriously, what other movie are you going to get an Ogress, a jester and skinhead dwarf, a vampire, a dracula that lives in a clock, a she-wolf, a random violiness, a Van Helsing, psychic connections, and some totally silly nuns? Where? Yeah, I though so.