Attack of the Sabre Tooth 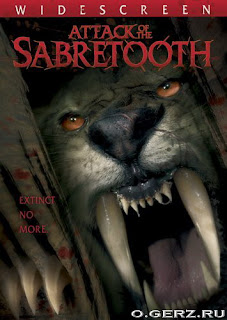 Stop me if you've heard this before. Millionaire mogul guy starts prehistoric theme park on deserted island and invites other millionaire mogul types to preview the island before it opens. Shit goes horribly wrong and the prehistoric attractions end up stomping and eating everybody. Sounds exciting, right? It was pretty exciting when it was called Jurassic Park and featured scary T-Rexes and Raptors and loads of atmosphere. Attack of the Sabre tooth's, functions on the aforementioned prehistoric theme park gone awry premise, but features only three bulimic sabre tooth tigers attacking in broad daylight, one of which is deformed. Yes, they're bulimic. And one is deformed. You heard correctly. They eat people only to vomit them back up so they can eat more people for the sheer pleasure of it. And this is why I love movies like Attack of the Sabre tooth.

The following are more absurdities from the movie, which only elevates it to the upper echelons of SciFi Original territory, at least for this blogger:
1. Sabre tooth vision. It's like sasquatch vision or dinosaur vision or whatever giant creature is stalking stereotypical teens vision. Basically, sabre tooth pov shots which feature a neon orange filter over the lens and some blurring around the edges. This sort of vision is essential to the creation of suspense and fear in the viewer.
2. It features a goth girl pledging a sorority. On what planet would a goth chick EVER pledge a sorority? Maybe she was just being ironic? This being said, I can't stand goths in movies. They're too obviously fake. Not that a movie like AoftheS is known for its subtle nuances and depth of character, but still. (I pretty much only really enjoy the goths in The Convent. Ooh, I should do a review of The Convent - it's been far too long since I've watched that!)

3. Savannah, the young woman in charge of security on the island, has had every single one of her boyfriends die in some horrible manner. One was electrocuted, another beheaded, I don't know. So the guy she's currently effing is more than a little nervous, understandably. That still doesn't stop him from having sex with her, though. Of course not, we're talking sex here. For free!

4. The word sabre tooth is never mentioned. Niles, the English-accented millionaire asshole that's running the park, calls them cats, as well as genetic perfection, but never calls them sabre toofs. How can they be genetically perfect when they're bulimic as well as deformed? Oh, I guess you hadn't heard that genetic perfection encompasses eating disorders and malformed limbs. I wish I was genetically perfect!
5. It was refreshing to watch a SciFi Original that didn't feature a giant shark. I still love love love giant shark movies, but rarely do you see a movie that features a genetically perfect malformed bulimic prehistoric feline.
6. It has the scariest poster ever. Look at that thing. I can hardly stand how menacing that cat looks. The teef are glistening and it looks so enraged, like he's ready to rip off the cover and attack. I'm glad I got this through netflix, because I can't look at the cover art for very long, lest I pee in my pants from fright.
Okay, I'm suffering from a slight bout of ginfluenza this morning, as the per the Monday usual, although it's not too bad, I just feel kinda squirrely in the brains rather than full-on hungover. I was also drinking heavily whislt viewing Attack of the Sabre Toof over a week ago, so I'm gonna cut this off here. Partly because my wine addled brain can't read the chicken scratch I call notes I took in order to recall this movie. And I hit all the highlights above. You're welcome and have a great rest of the day.
Posted by Jenn at 11:25 AM