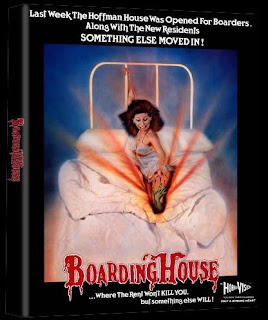 Last night I wasn't using my normal mental prowess (hehe) and decided after getting off work and not eating any dinner that staying out until last call drinking copious amounts of alcohol would be a good idea because the BFF got dumped by his woman. I was clearly exhibiting such behavior in the interest of being a good friend. Well, that's the last fucking time I'm being supportive and consoling because today I am paying for it with hunger, thirst, and a raging headache. Since I'm not fit to be seen in public, I shall regale you with the tale of BOARDINGHOUSE.
A simple premise really - a flamboyant psychic Lothario, Jim, inherits a haunted house from his uncle and places an ad in the paper for lovely ladies to come rent rooms. A harem of beauties show up and begin to romp topless around the pool, sex up Jim, and die all by the hand of a malevolent force that resides within in the house for some reason. I say for some reason because BOARDINGHOUSE is one of those movies that accounts for NOTHING within its plot. You would never guess by the above synopsis that this is one of the maddest, craziest, fucked up, HORRIBLE movies in the history of my movie watching career. It actually defies genre, spits in narrative's face, and yet still leaves me entertained. I'm holding my head and rocking back and forth, but I'm still entertained. I think if you spliced this thing together backwards it would still make the same amount of sense that it does in the order it was meant to be presented.
Let me try to recreate the experience, although it likely won't work. This is one where I should just stop now, tell you to go netflix this charming piece of garbage, and then you can get back to me. And likely your only comment will be Wow, and wow. Really, just wow. Here we go - don't stop me if you get confused. It will only lead to more confusion.
After some weirdness at an asylum - a doctor is forced to hang herself by an evil presence, phones ring for no reason off camera, and some other stuff - we are treated to our first image of Jim, aforementioned telepathic gigolo, in a speedo, sitting in lotus position on the desk in (his?) office. He makes the plants shake with his mind and then dips his socks in a crystal bowl of water before putting them back on and meets a roaring drunk that barges into the office for no real reason whatsoever. So you're thrown off by the weird beginning, then as you start to get the hang of it, sorta, here comes this drunk to mess it all up.
Back at Jim's haunted abode, the girls are arriving by the car-full. They all seem like your typical horror victim females and for the most part they are, but they arrive in such numbers and so quickly and appear so haphazardly, it's hard to keep track of who's who and what their relationships are to each other. Some appear to know one another, others are meeting for the first time. Are we supposed to care about these females? Likely not - it seems as if they're more friends of the director (the guy that plays Jim - John Wintergate) than actual actresses.
The first real dose of horror comes when one of the girls, when trying to light a cigarette on an electric stove gets an icepick through her hand. Everyone stands around and stares and Jim says, 'all her fingers work; I checked them.' Okay, Jim, whatever you say. They slap a couple bandaids on that serious flesh wound and call it a day.
Other weirdness occurs, such as the loping around of a weird gardener - think early 80's punk rocker/bum/war veteran - who likes to just stare at the girls, natch. One of the chicas tries to befriend him. 'Aren't you the gardener? I thought you only worked at night?' Wha? I don't know what the function of the gardener is really - to throw us off? I thought this was a movie about supernatural psychic stuff? Oh well. There's a black-gloved killer thrown into the mix as well.
Let's regroup. So far we have telekinesis, supernatural forces, a dash of giallo - all of which occur in such doses we forget about each as it vies for our attention. Convoluted? Sure. Boring? No way. There's dream sequences, skeleton hands, a demon that comes out when the girls vacuum, metaphysics, pizza, a pig gargoyle, chainsaws, a rock band at a pool party, and demonic possession. And would you believe there's more? I can't even recall everything in this - you just have to witness it for yourself. Whole scenes seem to ignore each other and someone says this gem of a line, 'I cut myself with the apple, I mean the knife.' Where else are you going to get that kind of wonderful dialogue?
It's shot on video and there are some major technical difficulties as well. You should see the demon! The gore gags are actually surprisingly well done and, as I mentioned, the dialogue completely off the wall. The whole thing is memorably quotable. It's all part of the fun though, and I think this was intended to be a spoof. It's really hard to tell though. It's a good thing that there aren't other movies like this otherwise we might start getting used to them. Just see it for yourself - trust me - you will feel madness enter your brain and you will LOVE it.
Posted by Jenn at 2:51 PM