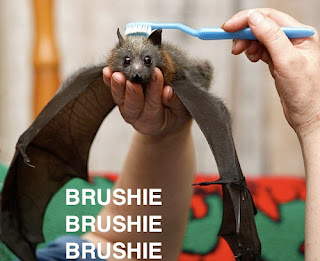 Aw man, to be the bat in this picture. What a nice spa day for him. This reminds me, really for no reason except that a bat is involved, about this time that Bruce and I went to Chiller Theatre and there was this dude there that had live bats on display. And one of the bats totally had his dick out and the bat wrangler dude, who was wearing a pirate shirt - the dude, not the bat, kept admonishing the bat for having his dick exposed. He was pointing his finger and literally saying to the bat to put that thing away. And of course the bat wouldn't. Because really, if you want to have your weiner out in front of an audience, you're going to have you weiner out in front of said audience. Who's really to blame here? I love bats. I'm also drunk right now.
Posted by Jenn at 1:12 AM