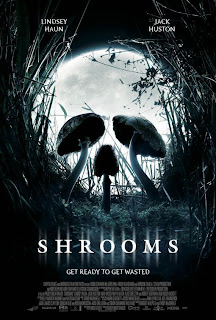 Today as I prayed to the gods to take my hangover away (it's a particularly violent one, the result of an impromptu dance party, a gay birthday bash, and the consumption of a shot called a Statutory Rape), I watched SHROOMS. Because sometimes you just want to watch something stupid that you don't have to think too hard about because thinking hurts. Thinking really hurts right now. Everything really hurts right now.
It's your standard attractive college kids going into the woods for a weekend of partying but some shit hits the fan and people start dying movie. This one features deadly, eat 'em and you'll see into the future and possibly become evil hallucinogenic mushrooms.
It is no secret that I party. Before you fall out of your chair from the shock of hearing that news, let me tell you, I have never taken mushrooms. I've never dropped acid, either. And I've never wanted to. Something about my brain would probably make me freak out, so I never understood the whole mentality about tripping. It just seems dumb to me. That being said....
This complete dumbasses in this movie have traveled all the way from happy American college life to the middle of fucking nowhere Ireland to pick these crazy mushrooms to brew into a tea so they'll start to see shit. They have a friend that's native to the region and he helps them pick the mushrooms and warns them off of the one's with a black nipple because if you eat those, you'll go fucking crazy as a loon and start fucking everyone's shit up. And you might also become psychic. He also regales them with tales about a nearby abandoned home for screwed up youth where some bad shit went down years before and some people got their asses killed.
Their guide has failed to mention this to Tara, our final girl in the tale, and she eats one of the bad ones - just plucks it right off the floor as if she's compulsed to eat it. She has a seizure and then starts to have prophetic dreams about her friends dying. She also says the best line in the movie, 'I just overdosed on the heroin of mushrooms!' Who says stuff like that? I love it - but that's about all I love here.
There's also two weirdos that live in the forest and some thing about sticking your dick in car windows while there are two people fucking inside to get a blow job. And there's a guy with a sack on his head and another ghostly presence that may or may not be killing everyone. And a twist ending.
Why did I watch this? The characters are horrible people - the jock is just such an asshole - you can't wait for him to die. But the actor that plays him doesn't have the panache to pull off even this stock of a character. His girlfriend's alright, but not particularly memorable, either. The other hippy-ish couple hate the jock and his GF, which is weird, because why you make an international trip with people that you hate? I know I like to go on vacation with people I can't stand. Tara's the good girl, but particularly annoying for no reason at all just because. The ending was abrupt and it's attempt at a twist felt forced.
I hate when there is just absolutely nothing to love in a movie (save for that one piece of aforementioned dialogue). Sometimes it helps if I picture something sucky as a seventies Italian version it makes it better, but even that wouldn't help this shit fest. My brain hurts now. I'm going to watch cartoons.
Posted by Jenn at 3:12 PM