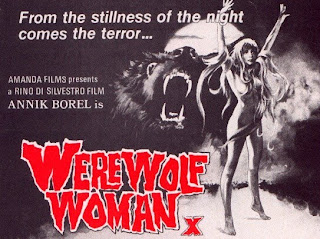 Poor Daniela. She was raped by a brute at age 13 and her family has a history of lycanthropy. Nevermind that she looks just like her great great aunt, furthering her delusions she's a bonafide werewolf. She's been having nightmares where she wolfs out and kills pilgrims, after dancing naked in a ring of fire (a very fine opening scene).

Daniela's wealthy daddy is concerned, moves her out to his Italian country home, and enlists the help of a doctor to figure out what the hell can cure Daniela from her mind. The doctor spends most of his time musing upon the obvious, such as, Daniela has sexual phobias because of her rape. Oh, really, doc? Why ever would you suspect that? And, Daniela is obsessed with antiques and old documents because she spends most of her time in the attic. Okay. Sure. Whatever you say.

Daniela does seem to get a little better after the doc's visit, but pretty redhead sister Irena decides to pay a visit from America where she's been studying Nuclear Physics. She brings her very masculine new hubby and fellow nuclear scientist, Fabian, to meet Daddy and Daniela. Daniela is instantly attracted to Fabian but since she has sexual phobias and all, she retires to her room quickly after dinner on the pretense that she's tired. There's a full moon after all.

Irena and Fabian decide to retire as well and end up naked in bed together. They're married, so it's okay. Daniela hears their lovemaking session and, in her extremely flimsy (read: completely see-through) nightgown, spies on the newlyweds, only after she sees a bloody vision of herself (?) and has a komodo dragon crawl around on her body (double ?). She touches herself a bit outside their bedroom door and then makes her way out into the night.

Fabian hears a door slam and leaves his lovely bride to go investigate. Daniela sees a vision of her dead relative she is supposed to resemble in front of a skeleton with a still human face attached. Another vision? It's never explained. Daniela then begins hyperventilating, but sees Fabian, strips nude, and calls him to her. She kisses him deeply and pulls him down to the ground, and instead of a sex session, she goes ahead and rips his throat out with her teeth and then rolls the body into a ravine!

Next cut and Daniela's confined (read: restrained) to a hospital bed in a mental ward. The doctors thinks she's suffering from nocturnal schizophrenia because they can't find anything else physically wrong with her, her symptoms seem to be those suffered by teens in puberty, but Daniela's an adult. Wow, doctor, thanks again for that sage observation.

Irena and Daddy come to see Daniela and Daniela gives the performance of the movie when she tells Irena, 'You liked Fabian. You liked making love with him! You were obscene! Disgusting! But you liked it! I hate you, you whore! Go fuck yourself! Whore!'That's pretty much what I'm going to say to the judge next time I go to court or maybe next time I'm in a really long line at the post office. Daniela has a total meltdown right there and it's freaking awesome. And I thought it was cool when she got all wolfie on Fabian.

She freaks out again when the nurse won't release her from her restraints. 'Damn you, you whore, you pig! You murderer!' It's another epic freakout. I'm beginning to really like Daniela.

The night, the nymphomaniac in the room next door to Daniela's dresses up in sexy black lingerie and red pumps and garish makeup and goes over to Daniela's 'to get to know her.' She rubs all over Daniela's restrained body and promises to release her, but not until after she goes down on her. Daniela bites her, but the girl releases her anyway, and gets scissors to the back of her neck as a thank you! So much for psycho lesbian hospital sex!

On the loose, Daniela steals a red raincoat and hides in a pretty doctor's car. Once on the road, Daniela pummels the doc's face into the steering wheel until it's a bloody pulp, the car crashes and she's free! She sneaks over to a nearby barn were a couple is getting it on and of course, ever the voyeur, Daniela spies on them. The lovers part ways eventually (it was a pretty long sex scene) and Daniela rips out the girls throat with her teeth.

The girl's body winds up in the morgue where the same two detectives that examined Fabian's body notice some similar injuries. The dumber of the two detectives muses about a story he used to hear his grandma tell about if you were born on Christmas, you'd probably become a werewolf (something I had never heard before). This information for some reason leads the smart of the two detectives to Daniela's dad, and they want to find her immediately.

Meanwhile, Daniela breaks into a house and steals some clothes and hitchhikes with an older gent who she gives a sob story about a husband that beats her to explain all her bruises and cuts. He immediately invites her to move in with him, but guess what happens when he wants to have sex with her? Yep, she bashes his head into a bedpost until it's unrecognizable. He did use this pickup line on her. 'Come on, ya big whore! I'm gonna rape ya!' How she could resist, I have no idea.

After killing this dude, she gets picked up by a movie stuntman, who fixes her dinner and relinquishes his bedroom to her, opting to sleep downstairs. This is obviously a decent fellow and Daniela decides to stop thinking she's a werewolf for awhile and allows herself to fall in love with him. She watches him and pretends to shoot him while he practices his stunts, they have sex, they get in the ocean with all their clothes on, have more sex, you know, stuff you do when you love someone.

Daniela decides to call her dad to tell him about her boyfriend, but at the pay phone, she garners the attention of a shady character. He's shady because he has a mustache. He, and three of his friends, follow her home and brutally rape her on the stairs and in the room she shares with her boyfriend. In the midst of this, the boyfriend returns home, and being a stuntman and all, gets kung fu on the attacker's asses. But he's no match for a knife and takes a stabbing in the guts. It's all pretty brutal and violent and I feel really bad for Daniela. Here she was with a decent dude that cared about her and he had to go and get stabbed but a bunch of fucking losers, one of which was wearing a black pleather suit.

Here comes the tonal shift. Until now, we've had a fairly violent tale of a woman's descent into madness, her dealing with this descent and then the subsequent ascent over the recesses of her illness. After the boyfriend gets stabbed, this becomes a revenge tale.

Daniela find out two of her attackers work at a junkyard and wastes no time clonking one of the dudes on the head with a giant wrench, luring the other one to the car to check on the passed out guy, and lifting the car with that claw thingy they have in junkyards and smashing it until both men are pulp.

She then takes the liberty of lighting the other one's house on fire while he's asleep, burning him alive! Then she cooks him and eats him while looking completely and utterly unhinged! Go, Daniela!

The ending is all very abrupt and not very satisfying, but the ride there was certainly madcap enough that I can forgive. I think what's most interesting that a film with werewolf in the title has an almost appalling lack of werewolf action, save for one opening dream sequence. The werewolf-ism in this movie is more of the mental variety in that it's all in Daniela's head, which is somewhat refreshing than the whole curse thing. And it could have gone a menstruation route that most werewolf movies involving women tend to go, and I didn't really detect that subtext anywhere. There is the one mention about puberty, but nothing female-specific. It's almost original, except that it is completely seventies. And it's certainly violent enough and it's a woman doing all the good killing.

I watched some of the special features with interviews with the director, Rino di Silvestro and the woman that played Daniela, Annik Borel, was in no other movies, at least to his knowledge, and he had lost touch with her many years ago. A quick IMDB search revealed she was in Ted V. Mikels' picture BLOOD ORGY OF THE SHE-DEVILS as a witch who gets stoned (I'm assuming with stones, rather than the other way), as well as a French film called TRANSVESTITE that sounds pretty awesome, as well as guest appearances on the sitcom THE ODD COUPLE. Weird. I absolutely loved this blond bombshell as she appeared to really think she was a werewolf and therefore, appeared to be certifiably insane. It truly must have been her standout performance, for sure.

I can't say no to werewolf movies in general and I certainly can't say no to voluptuous females who think they're werewolves and call everyone whores. I love movies where the word 'whore' gets used in freak outs. So by default, I must love this movie.
Posted by Jenn at 6:15 PM