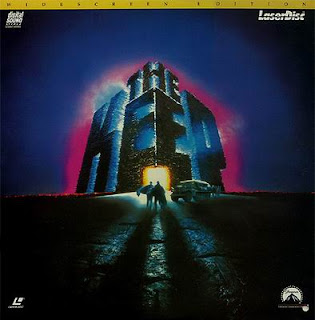 Day 22 - THE KEEP (1983) directed by Michael Mann. Nazis guard a citadel in the middle of nowhere Romania that harbors a demonic force. Said demonic force runs into a Jewish scholar that can likely stop it. Good, scary stuff, if not a little on the predictable side. Ian Mcclellan and Gabriel Byrne star, giving this a little bit of a cult edge. 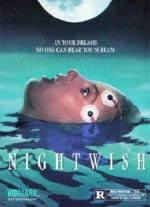 Day 23 - NIGHTWISH (1990). After much birthday carousing (drinks, brunch, more drinks, a bacon martini, a haunted hayride, and drinks), NIGHTWISH ensued. Although it has a 1990 date, it feels more eighties and stars a 'oh, that guy!' (Brian Thompson). Ghosts, aliens, a crumbling mansion, some grad students. If only this was made about eight years before it's time. 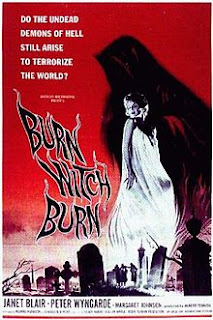 Day 24 - BURN, WITCH, BURN (1962). There used to be a band here in Richmond called Burn, Witch, Burn, and I always thought that was a good band name. A professor discovers his wife has been practicing witchcraft to advance his career, gets pissed, and destroys her occult supplies and unleashing terrible evil in the process. Without her help, he's fucked. Way above average and easily this week's highlight, I'm sorry I waiting so long knowing this existed and I never watched it.

Day 25 - PARANORMAL ACTIVITY 3 (2011). The only film I watched in the theatre for the Challenge thus far, I had a blast watching this with two friends not used to watching horror movies. I am not gonna lie - I was a little scared to come home to a dark house all by myself at night after my girl dropped me off. I had to turn on every light in the house. Including a few nightlights. And four candles. 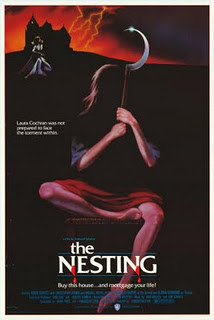 Day 26 - THE NESTING (1981). An agoraphobic mystery novelist takes residence in an old haunted brothel in the middle of nowhere. Decent, if not a little boring and predictable, this chiller seems a bit removed from its time. Not at all bad, but not at all good, either. The lead gets on my nerves a bit but I don't feel at all guilty when she inadvertantly kills her shrink. Not what I was expecting in a movie called THE NESTING. I was thinking killer wasps or roaches in somebody's weave or something not nearly as understated as this. 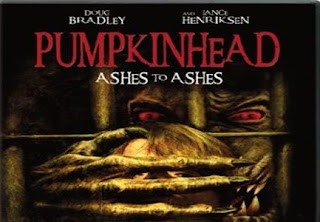 Day 27 - PUMPKINHEAD: ASHES TO ASHES (2006). Doug Bradley and Lance Henricksen in the same fucking movie? Yeah, maybe if the year was 1987 and this wasn't this. Still, how can I resist a vengeance demon movie with Doug Bradley and Lance Henricksen in it? I can't. So there. I enjoyed this shit show thoroughly, even though I was only a little wasted at the time. And is this the fucking third or the fifth? Do I care? Only a little. 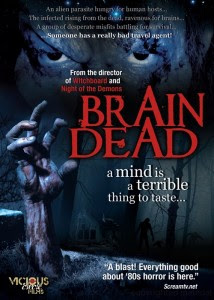 Day 28 - BRAIN DEAD (2010). Oh, I love you, Kevin Tenney. You gave us NIGHT OF THE DEMONS and fucking WITCHBOARD, so I expect great things from you. Too bad you did not deliver with this cheap-ass crap-fest with the WORST lighting ever (hey, don't film a zombie/horror/captive people movie in BROAD FUCKING DAYLIGHT (the FINAL DESTINATION movies are guilty of this a great deal, as well) and expect it to be great.) There's a little something called atmosphere, which you should know. But hey, everyone needs a paycheck, so whatever. This is crap. I just wanted the zombie monsters to show up and eat all the losers that populated this movie so they would stop getting on my nerves. So much for that. By the time the zombies got around to it, my pizza was here and I had better things to do, like EAT PIZZA.

Day 29 - CHILD'S PLAY (1988). Duh. Only the second movie of the Challenge I had really seen before. Like really, really seen and know all about. Chris Sarandon! Brad Dourif! Give me the power, I beg of you!

Day 30 - GOOD NEIGHBORS (2010). The presence of two beautiful cats practically from the first frame made me very, very anxious. Any time you see cats in a horror movie, especially this early on, means they'll meet a very untimely death. And they figure so prominently I got very very nervous. Almost to the point where I stopped paying attention and started cooking dinner while only half paying attention. And of course I'm right, the cats do meet an untimely end and there is revenge taken, which is the only thing I find redeeming about this predictable piece of annoyingness. You care about no one, except the cats, of course, and the presence of Scott Speedman alone makes me want to kill myself. Not particularly recommended but partially because I'm a crazy cat lady. This was also NOT what I was in the mood for and I should have just netflixed a monster movie of yore. Or watched something from the archives. And oh, how I hate that outdated SCREAM style cover with the disembodied heads floating above or below the title. Oh, how I loathe it.

There's week four, y'all. Neighbors and witches and vengeance demons and Nazis and citadels and ghosts and nestings and zombies and killer dolls and cat murder (the horror!) and who knows what's in store for tomorrow! We're both off all day and it is THE actual day so we will decidedly stay in and drink wine and watch tons of classics. Halloween is much like New Year's to us, in that it's a total amateur night and we'd much rather be at home with cats and Bela and Boris and Vincent and Basil and the rest.