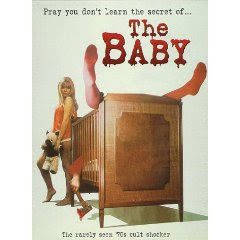 You know how I like my movies - sick and twisted and from the seventies. Even better if it stars Ruth Roman as a sadistic-as-fuck cross between Joan Crawford and Ernest Borgnine. Even better still if it's got a full grown man who has been conditioned to think he's still a baby. And eeeeeven better still, if there's some icky incestuous sexual situations. 1973's The Baby directed by Ted Post is an answer to all that I deem grand in a 'sploitation film. But just what kind of 'sploitation is The Baby? Babysploitation? Fullgrownmanwhothinkshe'sababysploitation? Well, let's decide together, shall we?
Ann Gentry (Anjanette Comer), a social worker with some severely skinny eyebrows and a cold sore on her lip, has taken a special interest in the Wadsworth baby. And what a special interest it is! The Wadsworth baby isn't a baby, but a full-grown man in his late 20's who behaves like an infant. He lives with his mother, Mama Wadsworth, the aforementioned battle axe, who is the kind of woman you would classify as a 'broad.'

Alba then goes off to make out with Dennis in a stairwell and she tells him, 'I bet ya want it don't you. Will you do it the way I want it? Will you get down and beg for it? Will you crawl around on the floor like a little (ah, wait for it..............) puppy dog (sorry, disappointment) for it? He agrees but first he has to hold his hand over a lighter's flame for one minute. He doesn't succeed, but by then it's time to do that killin' of the social worker that helps take care of the full grown man baby that lives here business that concludes most parties at the Wadsworth residence.
So while Alba's been commanding Dennis to do weird stuff in exchange for sexy times, Baby has managed to help Ann free herself. She takes Baby, punctures Mama's tires, and speeds off into the night with Baby in tow. Once she gets him home, she bathes him and puts him in a suit and tie and photographs him leaning on a wicker chair and sends said photograph to Mama to gloat and brag. It's here that you really see Mama long to have Baby back. Yeah, sure, she probably misses the cash he brought her all these years, but as she mournfully looks at the window from his nursery after she receives his photo, I actually shed a tear for the ol' bitch. Well, maybe not. But seriously, it's the only time she really acts like she gives a hot damn about her weirdo son, which she made like that in the first place. Or did she?
But, wait! There's more! Not to be made fools of, the Wadsworth ladies, classy as ever, decide to hunt down Ann and their Baby and they do so by driving around at night through unlit neighborhoods trying to spot her vehicle, a very effective method for finding out where someone lives when you had no marginal idea at all of where they lived in the first place. They gain entrance to Ann's house easily, although you would think the woman would have locked her damn door, knowing full well that the Wadsworths were pissed as a motherfucker for her stealing their monthly check in the form of a man baby. That's when I'm MOST likely to lock my doors. But Ann's ready for them and dispatches them rather quickly with the help of her mother-in-law. I'll leave out all the details, as this is running really long and I want to get another movie watched before I go to bed. I also really wanted to offer ya'll some more pics from this thing but I'm lazy and I've been working ALL day. I should quit being such a (wait for it) Baby! Ha!
I REALLY, REALLY want to spoil the ending, but I won't. It's so great! Trust. Best ending a man-baby-sploitation movie from the seventies could ever have. Let's just say, it answers a lot of questions about Ann and her 'agenda.' Oh yeah, so what kind of 'sploitation is this? It's not a horror movie, although the cover art on the DVD would lead you to believe it is. Even the tag line 'Pray you don't learn the secret of...' on the one pictured above and on the copy I have 'Horror is his formula' (my personal favorite). It was likely just billed as a horror flick to put butts in seats when it came out. But I could see this appealing to horror fans and weird cinema fans and all sorts of other obsessives and perverts. It appeals to me, doesn't it?
Posted by Jenn at 9:39 AM