Savage Steel: Begins With a Nightmare 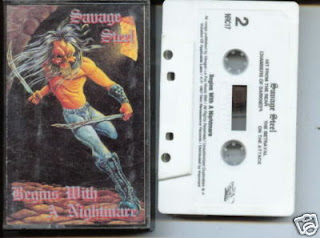 Check this sweet cassette cover art I found on ebay randomly. Never heard of Savage Steel but if I had an extra 9.99, I would sooooo drop it on this tape. Little about the band could be gleaned from the auction listing, but perhaps it's a reference to a character from the Marvel universe? Who knows. This cover is freakin' awesome. Tracks include 1. Hit it from the Rear, 2. The Betrayal (into) Chambers of Darkness, 3. On the Atack (sic), 4. Night Prowler, 5. Streets of Indecision (this is probably the ballad), 6. A Night on the Horizon, and 7. Switchblade Man.
A quick search on Amazon revealed the original release date for this title was January 2, 1991 on New Renaissance Records. The album is also available for download from Amazon. This artwork reminds me of this Ozzy tape my dad had back in the day, it was for Bark at the Moon (not that that art looks remotely anything like this art, but I will make a point here in a sec), and I think it was the first ever METAL artwork I had ever seen. True to my obsessive nature, I would go in the stereo cabinet and stare at that cassette tape's cover art for hours, but was always too afraid to play it. Like with horror vhs tape box art, as a young thing I was often scared, but intrisicly drawn to, heavy metal cover art. I don't know why my dad had that Ozzy tape, as far as I know he wasn't a fan, he tended to lean towards the Journeys and the Framptons of the rock world. I should ask him, and being one to never really get rid of anything, I bet he still has it.
Anybody familiar with Savage Steel? Were they, like, your favorite band back in the early nineties? Did your cousin play with them or know someone who did? I'd do some research but I'm lazy.
Posted by Jenn at 10:32 AM