In the Folds of the Flesh 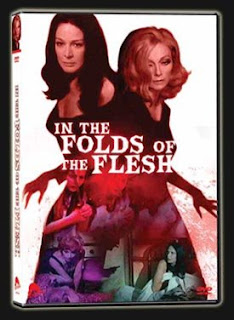 Sergio Bergonzelli's In the Folds of the Flesh has to be one of the most bizarre flick, even more bizarre than my weekly dose of Tim and Eric. It opens with the police in pursuit of Ron Jeremy lookalike, Pascal, an escaped convict. They chase Pascal to Lucille's, a Barbara Steele lookalike's, house, more of a villa really, where he sees Lucille burying a body wrapped in a carpet. The police gain access to Lucille's villa and capture Pascal. Cut to swirling colors and an ominous quote from Freud and the opening credits.

Cut back to the villa, only it's thirteen years later. Cousin Michele has arrived and he's pretty excited. We meet Lucille again, as well as the girl she is supposed to be governess too, Falesse, even though Falesse seems at least fifteen years too old for her role, and Lucille's son, Colin upon Michele's arrival. Falesse shows Michele some human skulls and Colin goes outside to feed the pet vultures. Then Michele's German Shepard digs up another skull and Colin kills the dog for being so nosy. It's an all too real scene of animal cruelty and one I did not enjoy. I HATE animal cruelty in movies, absolutely hate it. Luckily, it doesn't last too long.

Back inside, after some shameless flirting on Michele's part, Falesse takes out a dagger and stabs him. She seems to go into a psychotic trance or something, her eyes glaze over because she's apparently remembering another killing - and her memories come to her sort in a sort kaleidoscopic form and Colin comes in and drags Michele's body away. Just another day at the office for Colin. Then Alex, a friend of Michele's arrives, while Colin and Lucille do laundry. And by do laundry, I mean, they dissolve Michele's body in a vat of acid. Alex shamelessly flirts with Falesse as well. He tells her, "I'm no amateur, I've got technique, you'll find out." Then they all sit down to a meal wearing some pretty awesome outfits. They quote Freud, play guitar, and eat chicken, apparently a sign of virility, according to Colin. They they listen to a recording and Colina and Falesse dance and start making out while Alex laughs feverishly and cheers them on. Lucille breaks this party up and Falesse and Alex retire upstairs for some heavy petting. He takes her wig off and she freaks, something about only daddy can touch her hair and she cuts his head off with a sword. Then she clumsily puts her wig back on, has some more kaleidoscopic memories that intone a sexual relationship between Falesse and daddy and Lucille comes in to remove the body. Anyone sensing a pattern?

Then there's a scene at a mental hospital where some girls in mod outfits play with dolls and sing to themselves and suddenly we're back at the villa and Falesse is describing her crippling loneliness. Then Pascal shows up again to blackmail Lucille into giving him money or else he'll report the killing from thirteen years ago. Pascal wants them to dig up the bones of the body but they dig up Michele's dog instead and throw the corpse at him. He freaks and shoots their pet vulture. You would think then that it would be clobberin' time, but Colin and Pascal end up wrestling for way too long and the Pascal takes the upper hand. It's weird, because the family should get the upper hand because they've so owned that position before. They easily dispatch Michele and Alex and seem to enjoy doing so. I guess Pascal is blackmailing them, but shit, with all the swords and daggers they have lying around for stabbings and beheadings, you would think they would use them. But that would starve us of the unusual killing to come.

So Pascal ties them all up and treats Colin to a 'passion play' which is essentially the fondling of naked Falesse and then he makes Colin shine his shoes while promising an encore performance of the 'passion play.' He then orders Lucille to fix him a souffle and they go outside. Then Lucille has a flashback to her days as a Nazi concentration camp prisoner where she watched as her mother and sister were gassed. The Nazi's rape and torture her, but not before she learned how to kill someone with cyanide, which is the way they plan to kill Pascal, which they do, with excellent results. In fact, it's one of the most inventive kills I've ever seen. They place the cyanide tablets on a Coo-coo clock and when the hour strikes, the tablets fall into Pascal's bath tub. Instant death and reason to wear a vintage gas mask. Falesse comes in and freak because apparently she had fallen in love with Pascal (!?!) and then she makes Colin her slave and they make out under the disapproving eyes of Lucille.

Incest, pop psychology, severed human heads, fabulous seventies fashion, pet vultures, Italian villas, and Nazi sex torture are just a few of my favorite things covered herein. But then it gets weird (I know! It gets weirder! Too much so for me to account for here.) and all plot twisty. And while seventies Italian cinema isn't known for it's linear narrative storytelling, this has so many freakin' plot twists, flashbacks, psychotic episodes and reveals by the third act to keep anyone entertained. Strange, weird, and at times, wonderful (watch it just for the fashion and makeup alone), don't expect a gialli or anything close. It has none of those trappings. This one is in a genre by itself but appeals to the vintage sleaze fan in me. Yay! Vintage sleaze!