Do you all have any idea the brutality that was the last forty-eight hours? Any clue? Try getting up with a hangover and bringing people fucking mimosas, coffee, and other crap until five in the evening three days in a row! Do it and see how you feel! If afterwards you feel like stuffing your face full of delicious cuban food and drinking until you pass out with cats all around you, you'll be justified. I mean, it's lucrative as all hell, but damn if I ain't tired of people's bullshit by about the ninth hour.

So despite all that and the boyfriend and I working opposite schedules in the same restaurant (which also sucks), I managed to make a list of my all time favorite after hours shopping mall mayhem moments. Because it's what I do when I've reached my threshold.

1. BLUE SUNSHINE. Yes, Jeff Leiberman will forever hold a place in my heart for directing long-time fave SQUIRM, and I even liked his newest effort, SATAN'S LITTLE HELPER, despite the horrible video game graphics, but BLUE SUNSHINE is a trippy, awesome 70's flick that I should review in it's entirety, but I'm just too tired right now. Fear the effects of residual LSD use, people! Your hair will fall out in patches and you'll terrorize people after the department store is closed! Heed this warning.

2. ELVES. I reviewed this movie here sometime ago and had a blast doing so. It's a great sorta-kinda Xmas themed Nazisploitation mixed with perhaps a Pagan meaning of Christmas with Grizzly Adams thrown into the mix. Still, it's from the 80's, so there's a mall! And it's every teen chick's dream sort of scenario (although not mine, because I was too busy listening to the Sex Pistols and The Ramones to care about the mall! Fo' sho'). The three chica protagonists invite their main squeezes to the mall where they work after hours for a little slap and tickle, but unbeknownst to them the Nazi Elf Third Reich is looking for the perfect specimen to impregnate, so a couple of bloody murders later, it's not so fun any more. Oh well. If I was locked in a mall after dark, I would sure as hell put on the trashiest lingerie I could find and make use of the cosmetics counter, Punk or no.

3. NIGHT OF THE COMET. Same as the aforementioned really, only this time it's the zombie Apocalypse. Lots of use of the cosmetics; good time is had by all.

4. CHOPPING MALL. Also sharing a connection with NIGHT OF THE COMET, in that it stars the adorable Kelli Maroney as well. In addition, it has the rapturous Barbara Crampton baring her boobies for all to see in a mall after hours party to end all mall after hours parties. When those SHORT CIRCUIT style security robots show up, not even a poor man's Peter Faulk (Dick Miller) can save us.

5. And of course, no post about a fucking mall would be complete without Romero's DAWN OF THE DEAD. Predating all the aforementioned mall movies, with the excecption of BLUE SUNSHINE which came out in '76, DAWN OF THE DEAD will forever remain the quintessential mall horror movie. And I needn't go into further detail.

So there we have it. Any others you care to add? This is all I can deal with at the moment. Here, have a pic of Moochie in his new bandana dictating what we watch on TV: 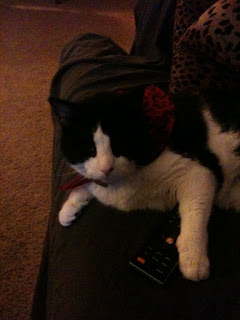