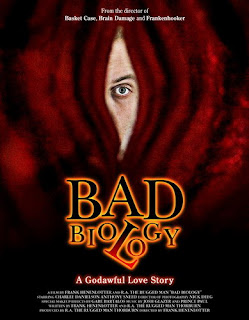 It's no secret I have a huge hard-on for Frank Henenlotter. He's an amazing director. He gave us BASKET CASE for crying out loud! (I have always loved the saying 'for crying out loud.' It makes me think of my grandfather, gods rest his soul. He also use to call the couch the 'davenport.' Who talks like that? Whenever we would jump on the davenport, he would always say, 'for crying out loud, stop jumping on the davenport!' Fond memories.) So I was super fuckin' stoked when I heard about BAD BIOLOGY being in the works and I've waited nearly over a year for Franky to give me some of that sweet old school New York sleaze I've been forever fond of. I mean, the man hasn't directed a movie in like two decades or some shit! And he rules!

I must say, I wasn't disappointed in the slightest! Rare! Super excited! I swear to you, BAD BIOLOGY was so much freakin' fun and as much as I hate critic speak, a return to form for my favorite grindhouse Times Square sleazoid cinema director EVAR (with perhaps maybe the exception of Andy Milligan - however, I don't have the same nostalgic budding horror movie fan connection with Milligan as I do with Henenlotter).

BB is the a boy with freak drug addicted penis meets the girl with crazy mutated vagina tale. It takes them nearly the entire running time to meet and the love is unrequited, but it's still a good time getting there. Jen is a talented photographer with an insatiable sex drive who finds solace in bedding, and subsequently murdering, random men she meets in clubs and bars. Batz is a reclusive hot piece with a sentient drug addicted penis who is miserable with his station in life because it's hard to jerk off and have regular relationships with women because his member literally has a mind of its own. The scenes with Batz telepathically communicating with is phallus aren't too unlike Duane and Belial's interactions in BASKET CASE and I believe this is entirely intentional. He tells that thing to shut up, tries to block out communication with it, and sweats, covers his ears and chews the scenery all the while during these scenes.

So Jen has to do a photo shoot at Batz' decaying house, which is how they meet. She's instantly smitten after she sneaks back in after seeing his dick for a second in the bathroom, and watches him fuck a prostitute. He gives her an orgasm for like forty-five minutes after two seconds of sex with is mutated member and Jen knows this is the man for her. She's been looking for something like this her whole life. But, all is not to end in blissful happiness, as Batz' dick and balls detaches itself from his body and goes on a raping spree of nubile young women in the apartment complex not too far down the road. Jen gets there too late and the poor penis, withdrawing from steroids, can't be messed with any further. And without his manhood, all Batz is left to do is foam at the mouth.

And did I mention that Jen is able to gestate a fetus in less than two hours after intercourse? Of course I didn't. Every time she has sex, she has a mutant freak baby that she abandons about two hour later. Good stuff.

The standard addiction stuff is all here. I've always maintained Henenlotter is violently against addiction. Look at BRAIN DAMAGE if you need more evidence. This is truly his most anti-drug/addiction film yet. Not only do the 'protagonists' suffer from severe sex addiction, of which isn't considered psychological, rather biological, an idea of a addiction that I've always personally maintained, Batz' penis is a drug addict itself. Drugs figure prominently in the picture, with a key scene where Batz goes to by drugs to satiate his dick's growing addiction (pun intended) where there is a grotesque picture painted of those addicted to meth. It's comical, in true Henenlotter style, because the man is definitely a master when it comes to the over the top horror comedy, but it still rings very scary for those who have experienced drug addiction firsthand.

The film is over the top hilarious and sad. It paints those that suffer from drug afflicted maladies in a comedic light, but still has an air of importance and seriousness. It's highly imaginative and, while I would have like a bit more of Gabe Bartolos supreme SFX, the sentient stop motion penis towards the end is good enough for me. Charlee Daniels that plays Jen is totally great - she has the perfect amount of over-zealous aplomb to be in a Henenlotter picture. Her sex scenes are so great! And she' beautiful, hilarious, and empathetic, even though she's a total murdering psycho with issues. Batz reminds me of Brian from BRAIN DAMAGE and Duane from BASKET CASE in that he could be the bastard love child of the two. He's sweaty, deplorable, weird, and addicted, but somehow you feel for him.

AND it has Casey Belial, the lovable hooker and Duane's confident from BASKET CASE, makes a cameo as Batz' nosey neighbor. I was on the lookout for cameos from other Henenlotter regs, like Kevin Van Hynreck, but my trained eye wasn't honed enough if that exists herein.