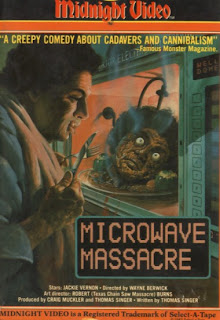 Way back when, I used to see this VHS box in the Movie Time store. It used to scare me. It had a gruesome looking head, eyes still intact, clearly nuked for the sole purpose of the hungry man with the knife and fork licking his lips to consume. Consume! As in cannibalism! Via the microwave! And 'massacre' was in the title - clearly a harsh word intended only for the hardest of the hardcore horror films. Never mind the tagline screamed 'comedy' - to me, this was one fucked up little movie - and I wouldn't see it until, oh, twenty-five years later.

Of course, time changes our views and I'm no longer the wide-eyed ten year old salivating over lurid VHS box art any more. But I still have those memories and those memories shape the movie watching persona I have today, so when I finally tracked down a copy of Midnight Video's version of MICROWAVE MASSACRE, I still had certain expectations in mind. I was expecting an outright horror film, what I got instead a deliciously trashy, misogynistic, pun-laden 'comedy about cadavers and cannibalism.' Allow me to give you the highlights.

Donald's life sucks. He works a crappy job as the foreman at a construction site supervising two horny dudes. (If you've never seen a glory hole for boobs before, the opening scene of MM is your chance!) He can't get a decent meal to save his life (think a giant crab on a huge roll - it's cartoonishly over the top, really), because his annoying wife, May, has taken up French cooking, in her gloriously gigantic new microwave. This thing is bigger than my refrigerator. I know appliances were huge in the seventies, but this thing is retardedly huge. Never mind the fact that May is cooking high-falutin' cuisine in it. Seems the oxymoron, but oh well.

After slaving over the microwave all day (she actually says this), Donald refuses to eat May's cooking. They get into an argument, ala the henpecked husband routine, and in a crime passionale, Donald kills May with a salt shaker, and he doesn't even forget to sprinkle some salt over his shoulder for luck. Relieved to be rid of the annoying bitch (Edie Massey is less irritating and a better actress and I kind of wanted to kill May myself), Donald goes about dismembering her body and storing it in the freezer. He wakes up the next day and doesn't remember killing May, until he opens the microwave and sees her lifeless corpse. 'Oh well, just the way she would have wanted to go - except she hasn't gone yet, oh brother!'

Later that night, Donald is watching a newscast about the perfect crime. Seems some guy stole a bunch of caviar and hid the evidence by eating it all. Ding, ding, ding! What do you think Donald decides to do next?

If you guessed making giant sandwiches out of live prostitutes and seducing a woman in a chicken suit who is dancing an Irish jig to come over for sex, only to cook her body to serve to his construction worker friends, you would be correct. 'I'm so hungry, I could eat a whore,' Donald quips, in one of his many, many groan-inducing, but oh-so-hilarious puns.

It's all in good fun and I love this movie. It's so morbidly over-the-top from the whole Jackie Gleason thing to the cannibalism to the call girls in their trashy outfits. However, it's a bit of a stretch for me to buy Donald's character switch. Yeah, he's been abused by his wife for thirty years, but he ain't no prized pig himself, coming home wreaking of booze and insulting May. It's no wonder she yells like she does, really. They hadn't even had sex since 1962. 'You're a walking contraceptive,' she yells during a heated argument. Donald is completely joyless in the beginning and his murdering of May seems to free him from this joylessness. Heck, he even gets to have sex after all these years. But it doesn't make him a better person. It makes him worse, as it turns him into a serial killer.

Donald just doesn't have it in him to pull off the whole serial killer/cannibal thing. He's just too much of an ignorant goomba. And he falls into the cannibal thing most unwittingly, as he gets up in the middle of the night for a snack, only to groggily discover he's eating a raw hand. 'I may have underestimated May's taste,' he says, and continues chewing. The leap is made too quickly and all of a sudden he's a cannibalistic maniac, while still maintaining his persona of beaten down working class man who can't get anything good to eat from his nagging wife. But it's not calculated, either. Donald is one of the other and a flesh eating Jeffrey Dahmer type he ain't.

But this movie is successful in that it blends the whole horror and comedy thing quite well, something that is very difficult because the writer and director must be skilled at both. It's no massacre of the Texan variety, but it doesn't aim to be either. It's a silly, trashy romp that you just don't come by that often, especially nowadays. Mother-in-law jokes, objectifying women, microwaves - it's all very pre-Married with Children. And the fashion! Oh the fashion. It's the worst of the seventies worst, but it's also refreshing to see real women in a movie, a little cellulite, curves, and all. And where else are you going to see a live hooker slathered in mayo, put between two giant slices of bread, and sawed in half? Or a sexy blond doing yard work with a vibrator? Or a glory hole for boobs? Or death by microwave, for that matter? That's what I thought.

Now, if only I could get an uncut box copy of the Midnight Video version. All my damn Midnight Video boxes are cut to fit clamshells and it's annoying. To the time machine, before all the big boxes on VHS were cut!
Posted by Jenn at 2:34 PM