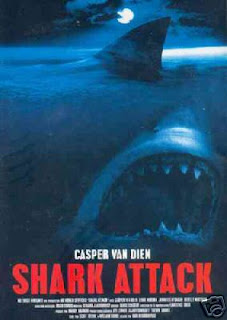 As long time readers likely know, I love anything dealing with a giant shark. I dry myself every morning after my shower with a towel with giant sharks on it. I have a giant stuffed shark that I sleep with. I've been devouring (pun intended, natch) Steve Alten's fiction concerning Megalodon this past month. And I watch anything and everything that has to do with sharks, giant or otherwise. So this week, I have spent a majority of my time watching, amongst other things, Danny Lerner's shark movies (Shark Attack, Shark Zone, and Raging Sharks). He also directed Sharks in Venice.
Aspiring filmmakers take note; Lerner's movies are an exercise in the following:

-If someone gives you a giant shark head puppet or you come into possession of a giant shark head puppet some sort of way, legal or otherwise, make movies with it! Make lots of movies with it!
-Use the same giant shark head puppet in three different movies with the same effect. Don't change anything about it. It's perfect the way it is, complete with apparent hole in the upper mouth. It doesn't matter if the puppet has holes in it - fill that in with extremely noticeable CGI in post.
-Use same stock footage repeatedly. And I do mean repeatedly. Who cares if it's obvious! If you found it in the stock footage library archives and it somewhat fits with your movie, by all means, use the hell out of it! Use it ten, fifteen times in the same movie! Hell, use scenes from your other giant shark movies in the new, somewhat dissimilar, shark movie you're currently directing! Why not?! Save time and money!
-Intertwine CG sharks, giant shark puppet heads, and stock footage. It should not matter that the CG sharks look nothing like those in the stock footage or like that of the puppet. By seeming to not care about these details, you seem like a artiste.
-If your usual giant shark movies are seemingly a bit on the stale side, integrate an alien subplot involving cold fusion, a black ops rogue fighter, and Corbin Bernsen. You can probably find stock footage of aliens somewhere or maybe your producer friend shot some footage of aliens for another movie, so you could again, save time and money by using those sequences shot for another movie, all the while injecting life into another sharks running amok sequence.
-Every movie should open the exact same way - with an aerial shot of a plane flying FAST over the sea. Just shoot it once and edit out the casts' names later on. Once again, money and time saver. 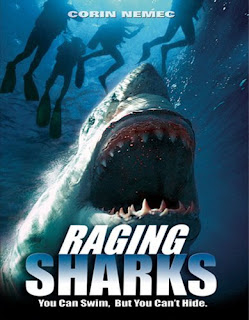 Thank you, Mr. Lerner, for helping me become a better filmmaker. If I, too, came into possession of a giant shark puppet head (*fingers crossed*), I would take that as a sign from somewhere that I needed to get into a big old tank full of water with a camera and make my own giant shark movie. It doesn't matter that these movies are hardly technically proficient, involve stupid action sequences that go on for way too long (sometimes I forget I'm watching a giant shark flick), or have serious plot holes, continuity errors, and repetition of obvious stock footage. When I get off work, all I want to do is come home, curl up with a nice big vodka soda, and watch some CG sharks piss off Casper van Dien. I seriously could not ask for anything more from my life.
Side note: I did also recently watch Mega Shark vs. Giant Octopus, but since Lerner didn't have anything to do with that movie, I didn't think it warranted discussion here. I freakin' loved it; it actually far surpassed the aforementioned, as far as the schlock factor goes, however the internets are currently all a-flutter about it, so I figured I didn't need to throw my two cents in at this time.
Also slated for this week's unofficial Shark Attack week is the Lerner-produced Shark Attack 3: Megalodon. You know, since I've been reading Alten's Meg series, I've become obsessed with Megalodons. They are just so fucking scary. Could you even fucking imagine a shark that's 75 feet long and has a dorsal fin that's some odd seven feet high? The teeth, of which it has at least 24 rows, are over a foot long and made of bone that could cut through a diamond. A Megalodon could snap a 2,800 pound Great White right in half! A shark that big is about the scariest thing I could ever conceive. I can't even wrap my brain around seeing something like that! Jaws, Schmaws. I know Lerner's Meg movie will be peppered with ridiculous CG, but if someone made a realistic (and very expensive) adaptation of one of Alten's books, I think I would die! I wouldn't even be able to go see it! I would literally throw up. That's how scared I would be.
You know, it's nice (and refreshing) to actually still be scared of something in horror, since we all get kinda jaded being fanatics and all. We forget sometimes what it's like to actually be scared of the movies we watch and the books we read. Megalodons scare the bejeesus outta me and that's a good time!
Posted by Jenn at 11:04 AM