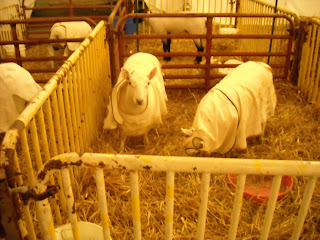 Don't those sheep just look like they are going to eat your soul? This is one of the many reasons I love the carnival. Soul-eating were-sheep (I wish! In my wildest dreams!), giant pumpkins, sideshow attractions (as they were), and lots of disgusting food. Last night, the ex and I embarked on our annual journey to the wonder that is known as the Virginia State Fair. I've been to the State Fair every year for as long as I can remember. And while it's not as great as it used to be- I can actually remember a midway where there was a 10-in-1 with the freaks outside and a barker and the whole deal and last year there was an airbrush tattoo booth where I got 'Lil' Sexy' 'tattooed' on my neck and this year it wasn't there (boo!) and you can't win Motley Crue mirrors at the games booths any more-but we had a good time anyway. Here's some of my pics from the fair. I totally would have taken more but my camera decided to stop working because of an exhausted battery. Fie on the battery operated cam
era! Onward - the fair!
Okay, you know these are going to be some big ass pumpkins if they need to say it twice: 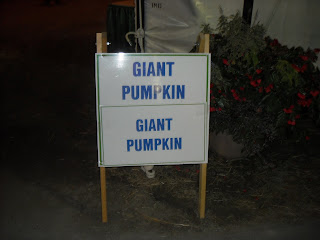 And they were! Here's me with the winner - I think he weighed in at like 1400 pounds or something: 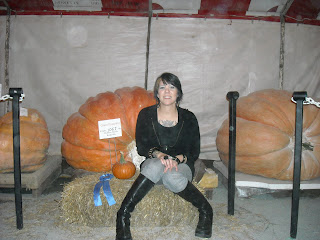 This pumpkin is a motherfucker: 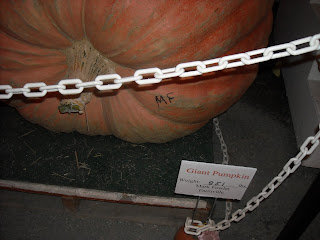 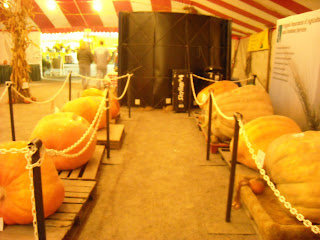 And here's me again: 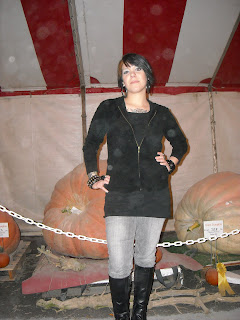 The monkey maze. Every year they retool this attraction. It's basically a house of mirrors or a house of plexiglass that kinda resembles mirrors a little bit. I think last year it was had a dinosaur theme. Still cool, nonetheless. Tiki Town. This is another one they retool every year. It's been at the fair since I was a kid. It had a generic funhouse theme forever. I like Tiki Town. 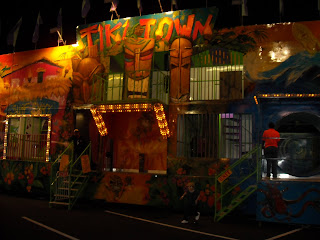 We had to check out Hercules, the giant horse. We always take it upon ourselves to see all the 'sideshow' attractions. Just cause. 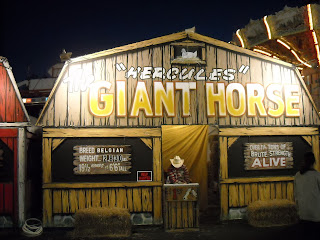 Here's me with Hercules. He's a clydesdale, I believe. Not that exciting, really. Still, he's pretty big, I'm pretty small but I have on five inch platform boots in this picture. If that gives you some perspective. 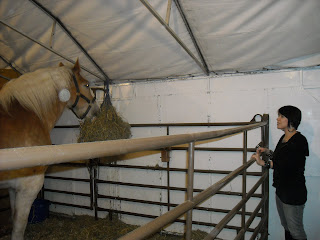 Next up is Black Jack, the giant steer. Here's his hideout: 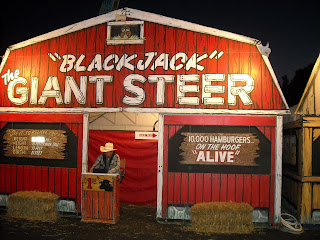 And here he is: 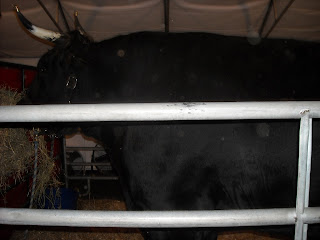 The World's Smallest Woman attraction. Last year, she was this chick Bruce knows from the post office or something. He actually recognized her. They had a conversation regarding this. Random. 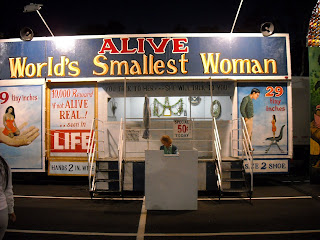 The Snake Girl attraction. Every year we go see the snake girl. Every year we are disappointed. Still. We also checked out the live snake attraction, which was AWESOME. The albino python was freakin' gorgeous. 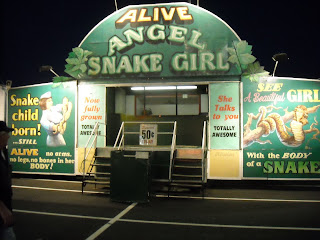 And no fair would be complete without me completely gorging on fried deliciousness. Last night I ate shrimp on stick, a chocolate banana on a stick, sweet potato fries, a corn dog (yes, it was on a stick) and an deep-fried alien on a bun: 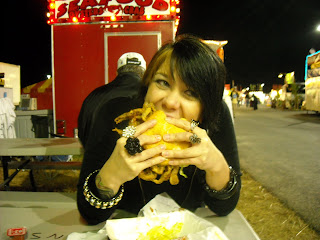 Fun was had, but no rides were ridden, because seriously, who wants to ride something that's held together by duct tape after eating an alien sandwich? Not this girl. There's a picture of me eating that chocolate banana on a stick (literally), but it's a little x-rated. Use your imagination, you guys are a bunch of perverts. I know you.
Posted by Jenn at 10:58 AM