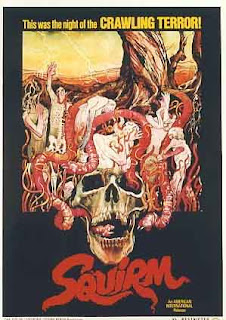 There is no denying I love SQUIRM (1976). I have the framed original poster art hanging in my bedroom. I wear the tshirt at least two times a week to sleep in AND go out, and own both the VHS and DVD copies of the film. That being said, I watch it at least two to three times a year, since discovering over a decade ago, and show it to my house guests if they haven't had the pleasure of seeing it. I would say it is definitely in my top ten, which includes, but is not limited to, FROGS, BASKET CASE, FEMALE TROUBLE, and THEY LIVE.

So, I had the new man in my life over last night, got a box of wine at Target on sale, and commenced with a SQUIRM viewing. What a fucking great night!

The premise is pretty simple, really. It's a nature-run-amok tale involving worms that have been made all animated and killy by an electrical storm. It takes place in the rural town of Fly Creek, Georgia and the accents definitely reflect this. The story revolves around Mitch, a dorky New Yorker who has traveled to Fly Creek to meet gorgeous ginger, Geri, presumably for an antiquing trip, but there's no denying the chemistry between the two. Geri lives with her mother, who becomes increasingly paranoid over the course of the movie, and her stoner, platform shoe wearing sister, Alma, who also seems to have a bit of a thing for Mitch. Mitch and Geri get into the thick of the things when the worms start going crazy, as is their way, and barely escape with their lives. Not much pretense, all entertainment.

It's from the seventies, it has the BEST line in a movie EVAR (You're going to be the spoil! You're going to be the wormface! - Tell me that is not the best line you've ever heard in your natural born life?), the worms look cool as shit (I think Rick Baker worked on this movie - one of his first gigs), and it's wholly believable as well. There are some great graphic scenes, the setting is effective, and the score strange and ominous. It's got all the tropes for a Cavalcade approved super awesome fun time!

It's also punctuated my life at various stages. Does anyone else have movies like this? I can remember watching it back when Bruce and I were together and the power was about to go out because of this horrible hurricane that was ripping through Richmond. It was literally the last movie I saw for twelve days while we waited to get our power back. Another time, I was getting tattooed and mentioned selling my movies so I could get more tattoos (I would never do that - it was just a remark). The dude that tattoos me said, whatever you want to do, just don't get rid of SQUIRM. I can think of all the people I've shown it to over the years and the people that it's resonated with ultimately stay in my life. I'm serious! I It also makes me think of my BFF from college because it was the last episode of MST3K and she absolutely adores that show. So you see, SQUIRM just isn't a movie for me; it's a serious part of my life. That sounds hokey but it's one of the reasons I'm a crazy obsessed movie person and totally got me started on loving all things regarding animals invading the human sphere. SQUIRM has always been there for me and I'm thankful for that.